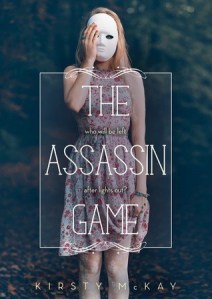 Book: The Assassin Game
Author: Kirsty McKay
Published: July 2nd, 2015
Rating: ★★★★
Who will be left after lights out?
Tag, you’re it…
It’s 4:00 a.m. when they come for me. I am already awake, strung out on the fear that they will come, and the fear that they won’t. When I finally hear the click of the latch on the dormitory door, I have only a second to brace myself before—
At Cate’s isolated boarding school, Killer is more than a game—it’s an elite secret society. Members must avoid being “Killed” during a series of thrilling pranks, and only the Game Master knows who the “Killer” is. When Cate’s finally invited to join the Assassins’ Guild, she know it’s her ticket to finally feeling like she belongs.
But when the game becomes all too real, the school threatens to shut it down. Cate will do anything to keep playing and save the Guild. But can she find the real assassin before she’s the next target?.

This book was on the lower half of my Netgalley predictions. I’ve had the ARC since 2015 and never bothered to pick it up, so I guess I just thought I wouldn’t like it anymore.

I am happy to report that I was WRONG. This book was fun, sometimes a bit creepy, and the pace kept up throughout the whole book.

There are many good things to like about this book. There is a small group of characters, it’s set in an isolated location, and an interesting mystery.

If red herrings aren’t your thing, this won’t be for you. There were plenty of red herrings in here that made me want to pull up a word document to keep track of everything.  But I was too busy reading! Now that I think about it, there were some other important things I ignored because I was reading this…. oh well! Future Beth can deal with it.

I can’t talk about this book without talking about the ending! The mystery was a bit predictable despite the red herrings, but I loved seeing the way it all came together. The ending was thrilling unputdown-able. That’s not a word. I’m making it a word. Everything wrapped up nicely which isn’t always my favorite thing, but I did enjoy it for this book.

The characters also had very distinct voices which is sometimes a bit difficult when there is a small cast but all of the characters are such a central part. It is very easy to let some characters fall away and just be in the background, but that didn’t happen here.

This was book 1 of 2020 and a book that has been gathering dust for way too long. I’m very glad I read this and I highly suggest you check it out!

One thought on “Book Review: The Assassin Game”